The rowing project, to which this blog is dedicated, had its genesis while I was spending much of my time In Mattapoisett, Massachusetts with my parents. My dad's various health issues were catching up with him. Twenty-five years ago, he had a septuple heart by-pass, then he had colon cancer, then he had testicular cancer. He survived them all and was grateful for the years that followed. But the last two years were hard. I'm grateful that, because I'm an artist, I can take my work anywhere. I was able to hang out with him and simply enjoy his company. But, of course, my work was effected.

My parents' house is the one in which my mom grew up. It was built by my great-great-great grandparents. And spending so much time there and reminded daily of my dad's mortality, I incorporated the presence of that house into my work. The emotional capital of that house is tremendous.


But while I was working on that body of work (the associated drawings of which you can see here), I was also reading a bit about my mom's family who'd lived in the house since 1850 and in Massachusetts since 1630. What survives from the earlier ancestors, for the most part, are wills. But there is the article with which I began this blog, the one recounting the death of my great-great-great-great grandfather, Gideon Dexter -- how he was blown out into Buzzards Bay and froze while desperately trying to row back home. It's no surprise that while my dad was working hard to stay with us (he was given two months to live and pulled it out to over two years), I saw the story of Gideon, rowing against the freezing storm, as an allegory. He was an Ur father, of sorts, and his struggle was that primal struggle to stay alive, and my response was that impossible desire to anchor those we love to this world and pull them back to us, whether that be to pull them back from the funk of a bad day or to pull them back from  serious illness.

My dad died on April 15th, tax day, a day that no one likes. We had his memorial yesterday. I took this picture (below) later in the day, when my brother, sister, mother, and my cousin went back to the cemetery to tend to the flowers. They are all standing near my father. The red flowers that you can see are each placed near the headstone of one of my ancestors. Gideon's headstone is on the left, and his father, and son are shown too. All together, the headstones of seven generations are in this frame. Gideon's grandfather is buried far behind where I took the picture, on the other side of the cemetery. 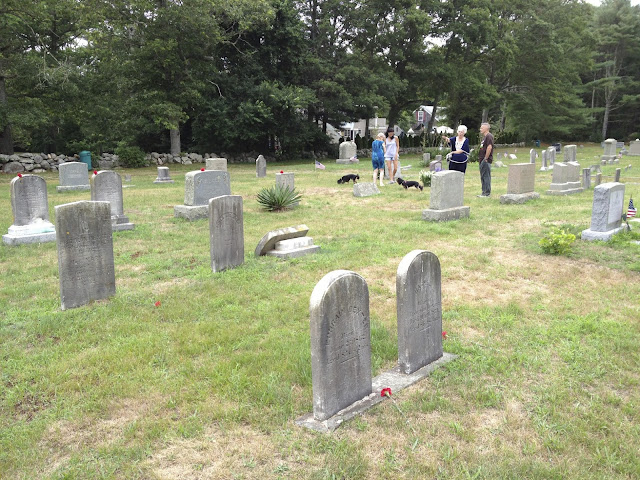 The graveside gathering was secular and fairly informal. My mom spoke, then my brother, then my sister. then me. This is what I read:

Cheap gas and cheap flights have made it relatively easy for us to travel hundreds or thousands of miles -- to gather briefly for the purpose of remembering my father, uncle Pete, Charles Ruggles Waugh -- but the ease of traveling vast distances spread us out in the first place. The living gathered here today have less physical community than the dead.  Within 20 feet of us, lay the remains of 7 generations. They lived, sequentially, but overlapping, as neighbors. That couldn't have been easy. The traits we share with family are just enough to facilitate profound irritation. Each summer, I watch as [my nephews] Ricky and Jaycee bicker incessantly just like [my brother] dave and I fought as kids. At some point in my 20s, I realized that the stubbornness and self-righteousness that got me so worked up about Dave were just as present --or even more present -- in me. I couldn't be an artist if I didn't believe on some deeply narcissistic level that my vision of the world is one that should matter to everyone else in the room. We are reflections of one another, though reflections distorted by fun house mirrors.

When I was three, my dad had his mother move in with us. Relating to Lyda was never easy:  I know where I got my self-righteousness. No relationship is easy. Yet through those 10 years that she lived with us, I learned that love is not a choice. When Lyda finally went into a nursing home, her memories unravelling to the point at which she thought she was a child again, my dad generously answered as her brother, or sister, or mother -- whatever role was needed. He did not need her to know it was him or if he was a man or a woman. He held her hand. I hold as one of my most salient visual memories, at the funereal home, my father tenderly stroking his mother's forehead and tracing one finger down the bridge of her nose.

While most of my friends grew up and spun further and further away from their families into communities of choice, growing up with my grandmother set the stage for an older way of living -- So when Ricky came along, it seemed totally natural for three generations to live under one roof. Ricky and Grampie got the chance to be buddies, picking up rocks, fixing broken toys, dissecting monster centipedes -- because doing chores together and poking at bugs together and learning together, even having breakfast together, is the genesis and embodiment of love.

My dad was always a person with the tenderest of hearts. He is the one who scooped up baby birds that had fallen out of their nests and fed them using tweezers. He sat by the bedside of every sick pet, stroking their fur and offering them water with an eye dropper. As he got older he always signed his emails "love dad"; when he went to bed he said "good night -- love you." Recently, he took to greeting and saying good bye with the sincerest of bear hugs. This was no hearty handshake, no chest bump or bro slap on the back. Dad had no patience for that macho crap.

As much as my dad believed in the healing powers of his tofu lunch, I believe that he lived an extra 25 great years as a cancer survivor because more and more he chose to embrace that sincerity, to engage compassionately as much as he could. Walking at the Mattapoisett wharf, he never hesitated to ask a fisherman about how often he needed to paint his boat's hull, or about bilge water regulations; if he asked you how you were doing, he expected an actual answer, not an empty "good." His compassion reached out to the buildings he repaired; he worried about them like children, and he wanted to have a little talk with every dog he met on the street during his morning walks with my mom. There is a popular philosophy that we should spurn connections, simplify our lives, throw out, start fresh. Dad did not subscribe to that philosophy. He would not throw out the unresponsive computer, or the broken hair clippers, or the useless cell phone charger, or the wobbly chair. They gave him good years -- and he might salvage a part. He engaged with these objects as they exist in this world -- he'd express mock outrage that the screw he used to fix the chair two years previous had worked its way out and plopped to the floor. But that's life, and having to re-fix things didn't depress him. Putting back those loose screws again and again kept him engaged. And this, too, is an embodiment of love.

I am glad that we can all be here in this cemetery; even though this is not a place any of us choose to be -- short or long term. This is a place that embodies history and connections and family. This is a place of love.