Today I received my confirmation letter from the Wooden Boat School in Brooklin, Maine. The grant writing has been kind of intense this week, so the letter was a good reminder that good things are to come.

Now I need to see if I can find a block plane, a spokeshave, a drawknife, 6" combination square, a 1" chisel, a set of bar clamps, a bench plane, a rule marked to 32nd inches, a woodcutting rasp, and outside calipers.

I may well be able to find these in the shop out in the barn. It was my great-grandfather's. And my father took it over. And I know my dad would have been excited about this class; he was a great self-taught carpenter and all around handyman.

Taking on building the oars and the boat is just another way I'm trying to connect, to bring (to row) back the father in this project.

(The picture is from the boat school. It's kind of romantic.) 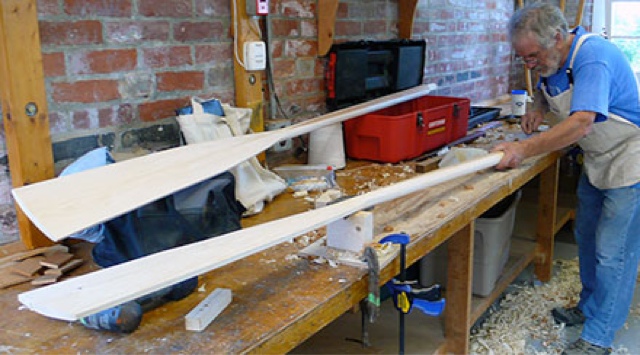 
I'm beginning my second day of working on the project's budget. I did this sort of thing for ten years when I worked on development for Momenta Art. But that doesn't make the process fun.

Plus I feel some pangs oh guilt as I talk to and write to all of the people I'll need to work with as consultants and for technical and creative support. I need to have their resumes, and I need to determine standard fees for each person. Then if the grants don't come through I'll have to push back my timeline or scale back the project or ask for volunteers. Ever present in the grant writing process are the many ways to fail, not just artistically but also administratively.

Okay. Back to research. What is the rental fee for two days for two power boats in Buzzard's Bay. And how much gas do they use? And how much circling will they do? How many miles will that add? And how specific do I need to be before anybody has helped fund this? 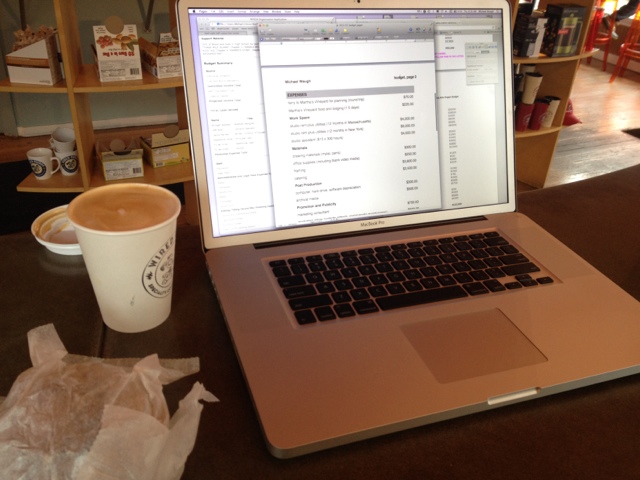 
I started this blog today to record the progress of a project that I've been thinking about for a couple of years -- and I've finally gotten to the point of action. The name of the blog is "rowing back," not because that will be the name of the work when it’s done, but because the core performative act around which everything else depends will consist of me rowing back from Martha’s Vineyard to my family's home town of Mattapoisett, MA, a distance of about 20 miles.

In 1827, my great-great-great-great grandfather Gideon Dexter, who worked in the shipbuilding industry of Mattapoisett, was killed. Here’s how it happened as reported in a clipping from a New Bedford newspaper of 1827 and reprinted in The Dexter Family in America:

"On January  31, 1827, the sloop Betsey of Wareham came into Mattapoisett Harbor and hauled in as near the shore as  was practicable on account of the ice; soon after she was seen to be drifting toward the bay and several persons from the shore went to her assistance. About 7 o'clock in the evening they lost the small skiff overboard and Mr. Gideon Dexter and Mr. Caleb Dexter, Jr. of Mattapoisett, took a boat and went to recover the skiff. The wind being strong at north and the weather extremely cold, they were unable to return to the sloop, which was run ashore, and the persons on board landed with difficulty, wet and much exhausted. The next morning, the men and boats not having returned, search was made and the skiff was found on Goat Island, about half a mile distant, and the body of Caleb Dexter was found lying on the marsh frozen. The other boat drifted out of the bay and was picked up near East Chop, off Holmes Hole, with the body of Gideon Dexter, which was also frozen. His hands were much lacerated and the oar battered to pieces, from which it  appears he exerted himself to return until exhausted. Mr. Gideon Dexter was 46 years old, and left wife and nine children. Mr. Caleb Dexter, Jr. was 34 years of age, and left a wife and an aged father and mother to lament their loss."

I’ve set myself a little over two years to get the project done. Gideon was blown eastward about 20 miles from Mattapoisett to “Holmes Hole,” now known as Vineyard Haven on the island of  Martha’s Vineyard, Massachusetts. For me to row the 20 miles from Martha's Vineyard to Mattapoisett, most likely against the prevailing winds, will be a huge undertaking, especially for someone who has never rowed, who has very little upper body strength, and who suffers from chronic tendonitis of the wrist, elbow, and shoulder from drawing too much.

My previous projects (drawings and performance-based work) are self-consciously masochistic. My right arm’s tendons will most likely never fully heal from what I continue to put them through. But the reason that I make work like this is not that I like pain. Really, what I’m concerned with is labor -- and especially the relationship of the labor of working people to capital. Artists' labor is not that different in the larger sense -- except that artists’ work is fetishized to the point of aestheticization. The extreme quality of my work means that its labors can not be ignored, and that is unsettling because the aesthetic experience of the viewer is interrupted.

I am continually looking for ways to prevent aetheticization, to make the world, to make labor, to make the extremity of my labor break the experience. That desire motivates me to spend the next year doing physical therapy and fundraising. I also plan to present, in early 2013, a solo show (at Schroeder Romero & Shredder) that is a prequel to this rowing project. This show will have plenty of labor-intensive micrographic drawings. For these drawings I have copied out, word for word, the entirety of Adam Smith’s The Wealth of Nations, which weighs in at over 500 pages. I also plan to make (by my own hand) the oars that I will use for my rowing project, and I plan to show those oars (again, as prequel) in this 2013 show. They will sit at the center of the show as totemic objects of power; they, too, will be covered in Adam Smith's text.

The following summer (2013) I will build (again, by hand) the boat that I will row those 20 miles. And over the whole two years, I will be working on drawings with rowing imagery composed out of text that delves into theories of history, class, and labor. I plan to edit those same texts as voiceover into the video piece composed of footage shot during my whole project. Drawings, video, performative rowing, and in-gallery performances will all bleed into each other and inform each other.

What happened to Gideon was thoughtlessly negligent. Was it worth it for two men to risk their lives to fetch a skiff from the harbor -- as a storm was bearing down -- with the harbor so dangerously full of ice that a ship couldn’t get to the wharf? Why didn't someone stop them?

By contrast, my two year project will be methodical, calculated. The haste of Gideon’s decision will be replaced by the care of my own. I will build the best boat for the situation. I will get in the best shape for the challenge. I will have a coach. I will have a master builder guiding me. I will gather a cohort of boaters and rowers to safeguard my journey. Unlike the working class men, Gideon and Caleb, whose lives weren’t worth as much as a skiff, I will build a network of friends, colleagues, and sponsors who will be by my side both figuratively and literally. And through this process, I will rewind the cynical accounting that led to Gideon's solitary and fatal exertions. I will not just row back in the opposite direction, I will reverse all the decisions, all the aesthetics that devalue labor. I will refuse the tragic end of one person by returning him to the interconnected and continuing histories of many. 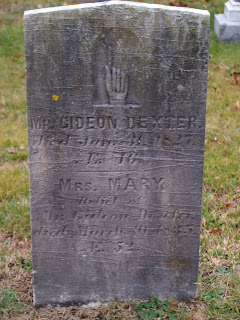 Here's the source of the picture of Gideon's grave.