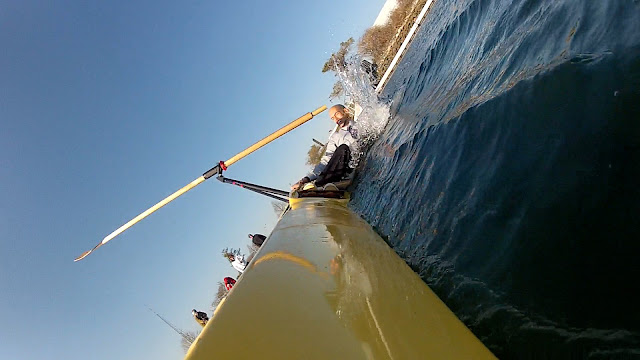 Last Friday, I finished burning text onto the oars that I started making last August. They're beautiful -- and, perhaps, useful. Over the weekend, they got a single coat of varnish. That's not enough for a long voyage. But I had nothing to worry about.

I decided to christen the oars today by attempting to row a racing shell. I tried this once before, with similar results. So I wasn't expecting to get far -- and didn't. About ten seconds into the voyage, it ended. Weather report: the water in New Bedford Harbor is currently 55 degrees. I am glad that I decided to make this attempt today. My original idea was to do it on January 31, the anniversary of Gideon Dexter's death (the event around which this whole project revolves).

I need to thank the four people who helped me today: Cheyenne Bayse, Carolyn Flynn, Sheilagh Flynn, and Calder Reardon. All the boats had been stored for the winter, so preparing for today's row and the safety precautions necessitated by the chilly water were not simple. Of course, I need to thank also New Bedford Community Rowing -- and assure all readers that novice rowers are not encouraged to get into elite boats like this. I was indulged because I wanted to experience exactly how far I have to go in learning and preparing for my row. I only got about 20 feet from the dock. So my question has been answered. 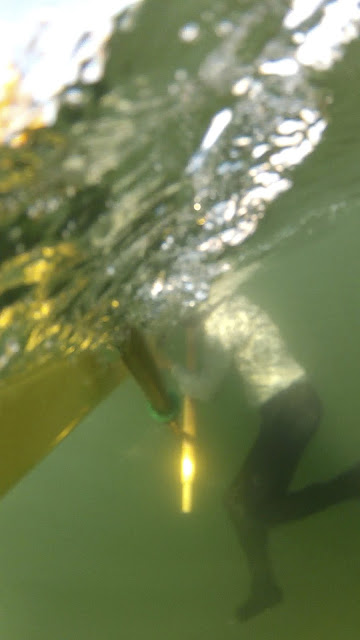 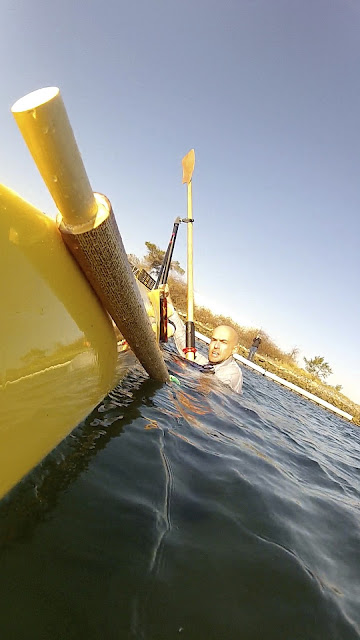 
Most of the difficulty involved with this project is personally rewarding. I like learning about Buzzards Bay, learning to row, and making art. But two aspects are not: fundraising and marketing.


One of the things that I decided early on is that I would develop an interim show that would exist as a kind of prequel to my rowing project. And that show is slated to happen this January. The show uses rowing imagery and text related to economics. The show will be hosted at Winkleman Gallery in collaboration with my long term gallery, Schroeder Romero.

The show stands on its own. But because the work relates to the ongoing rowing project, the January show will give me the perfect opportunity to talk about what's next. On a more practical level, the January show also will give my dealers the opportunity to sell some drawings. I'm keeping my fingers crossed that they will sell enough to subsidize the larger goals that I have over the next year and a half. I have, of course, applied for several grants that could help support this project. But, so far, I've received two rejections. So I'm not going to stake my career on the lottery of grants.

Over the past few days, I've been working on a design for a catalog of the drawings that will be in the January show. It's a handsome book. I can send it out to potential funders or to potential curators. But it's also available to order online. So I could possibly sell a few copies and make a few dollars to support this project. I'm planning to print and set aside 25 copies of this catalog. I'll sign and number them and offer them as premiums for contributors who donate to a kickstarter campaign. I plan to launch that during my January show, too. I'm certainly not going to start it now. There are too many people in need right now in New York. Winkleman Gallery, for example, was devastated. And I'd be remiss if I didn't mention the practicality of rebuilding the gallery before I can have a show in it. Hurricane Sandy relief is the immediate, practical problem.

If you're curious about the catalog, you can visit lulu.com. It could make a nice holiday present for someone -- but support Sandy relief first. 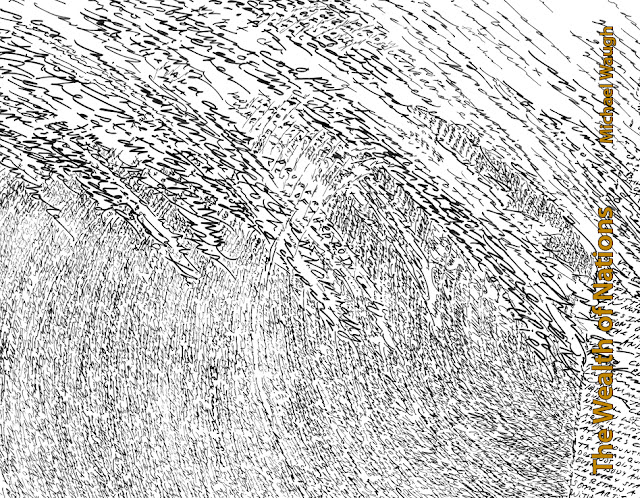 
I finally have professional images of the drawings that will be part of my upcoming show. I've posted the whole series on my web site. The largest drawing, a triptych, is 84" tall and each panel is 42" wide. When framed and hanging, it spans about 12' of wall. As with my other large drawings, it is overwhelming in person, but the detail gets lost in a JPG. Here's a detail:

The first ten drawings in this series, portraits of Ivy League rowers, were part of my 2011 show at Schroeder Romero. I followed those portraits by making seven modestly-sized landscapes, the triptych, and then two more portraits. All of the drawings use rowing as subject matter. Like my previous drawings, these pieces use micrographic text to compose the images. The series uses the entirety of Adam Smith's *The Wealth of Nations.* All told, I copied by hand 507 pages of text. The largest, the triptych, used 265 pages of text: 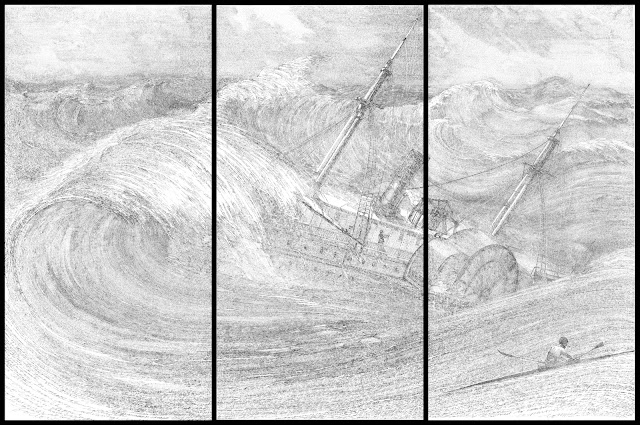 I think of this large work as the anchor of the series. It shows the image of a steamship getting subsumed by a storm at sea. A single passenger, a woman, stands on deck, hands clasped, looking out for rescue. A single sculler rows towards the doomed ship.

Adam Smith's book is something of a Bible for economic conservatives. Smith famously refers to the economy as being guided by an "invisible hand." However, like the Bible, the text is vast -- so vast that it seems, at times, to contradict itself. In addition to arguing for the virtues of self-interest, Smith also notes that governments should probably not allow businessmen to guide legislation. Although he hails the division of labor as the cause of wealth, he also notes that it has dehumanized workers and led to moral degradation. His book is speculative, not necessarily prescriptive.

I have engaged with rowing imagery for a number of reasons. One of the most basic is that crew, in addition to being a favorite art historical subject, also brings with it an undeniable mark of class privilege. In 1776, when Smith published the book, notions of class were unformed. And crew isn't the only sport that announces the privilege of its participants; all sport takes skills developed for the purpose of survival and transforms those skills into autonomous activity. The first marathoner, Pheidippides, ran 26 miles to announce to Athens that the Persians had been defeated -- not to achieve a personal best.

The transition of boating from a necessary skill for fishing and transportation into a sport is neither simple nor is it clearly an evolutionary improvement. Sport in itself calls into question the idea of progress. The Wealth of Nations continually makes the case for modern economic systems being more evolved than what came before, even though Smith cites problems with that narrative.

It struck me while reading The Wealth of Nations that so much of what is foundational for modern economic theory is also foundational for scientific theory and for art theory -- and are recurring questions in our own lives. Finding meaning is never as straightforward as it first appears. How can one summarize the visceral experience of making these drawings, of copying a 507 page book, of standing in front of the record of that much labour.

Superstorm Sandy has put a pre-mature end to this year's on-water rowing practice. I shot the above video a couple of weeks before the storm hit. And I'd hoped to get out there some more. I only got to row a single twice. The video is of my second time sculling. I'm pretty rough. I don't hold the oars even. I can't feather them. I haven't figured out how to get even power. But it was a beautiful day and I rowed the perimeter of New Bedford Harbor, which took about an hour (rowing inside the hurricane barrier and excluding the superfund, clean-up site).

Last week, I wrote on this blog that I would post photos of my recently completed large drawing. I should have been in New York during Sandy getting the drawing photographed. Instead, I stayed up in Massachusetts to help keep watch on my mom's house.  I did have to get up on a barn roof during the hurricane and staple down a strip of roofing that blew off. But, otherwise, things were pretty light.

At New Bedford Community Rowing, all the boats were taken off their outdoor rack, shrink wrapped, and staked to the ground. Today, I went over to help unwrap some and re-rig them. Unfortunately, the single that I rowed in the video seems to have been taken off site, stowed away for the winter. So I may have to wait until next Spring to work on my technique.

I'll be heading home to Brooklyn Sunday or Monday so that I can vote on Tuesday. And I hope to get my work Photographed soon. I'll also get a chance to help my friends who've been effected by the storm. I fear that at least one of my drawings was destroyed by Sandy*; it was at the gallery where my January show is scheduled. The gallery suffered heavy flooding -- Kind of ironic considering that the two central pieces of that show will (hopefully!) be 1) a drawing of a ship getting subsumed by a storm -- and 2) the pair of wooden oars that I've been working on since August. Oars aren't much use against a storm, especially without a boat. 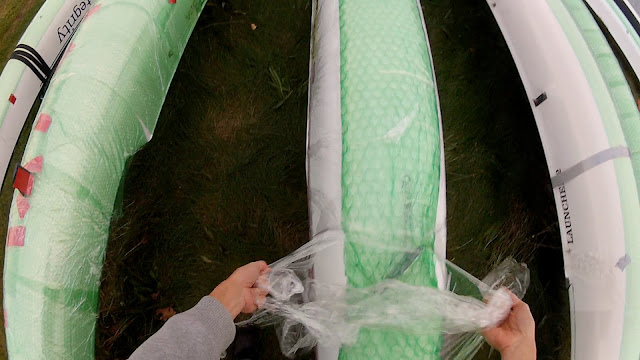