The Boat Comes Together

As the summer progressed and the daylight decreased, my work hours increased. I was spending up to 14 hours a day with the wood-burning pen clutched in my hand, copying text onto the wood that would become my boat. I couldn't work fewer hours because I was scheduled to go up to Brooklin, Maine and work with master boatbuilder Geoff Kerr and my next opportunity to work with him wouldn't be until April. I finished burning the text with one day to spare (which I used to ride in the Transportation Alternatives NYC Century -- I really know how to relax).

The boat that I'm building for my voyage across Buzzards Bay is an Annapolis Wherry. Its design calls for planks of okoume plywood. It's lighter and stronger than using traditional planks. And part of my decision making process for this project is to use all the technical innovations available to ensure that I don't share the fate of my great-great-great-great grandfather, who died in a rowboat in the middle of the bay.

Plywood is not the most receptive of surfaces for wood-burning. In all, I spent four and a half months copying text onto the wood. As the hours of labor added up, my anxiety mounted as well. I knew that the boat's design called for sections of the hull to be reinforced with fiberglass. In other words, I would be covering my tiny, handwritten text. Before I started the project, I spoke with Geoff, who assured me that the layer of fiberglass would be absolutely transparent. But my text is so small that it's barely readable to begin with. Even the slightest blurring of the text could ruin the effect, my efforts, and the boat as a conceptual object.

I arrived in Brooklin on Sunday, September 15. I was able to afford working with Geoff because he was simultaneously helping ten other people who were also building Annapolis Wherries at the Wooden Boat School. And the entire process of building the boat was squeezed into a single week. On Sunday, Geoff got a head start on the undertaking, by doing the first step on everybody else's boats -- which was to glue the shorter lengths of planks together into the seventeen and a half foot lenghts necessary for the boat. I met him there and watched him glue together the first couple of planks -- and then glued mine together. Here's a picture of the building where we worked. 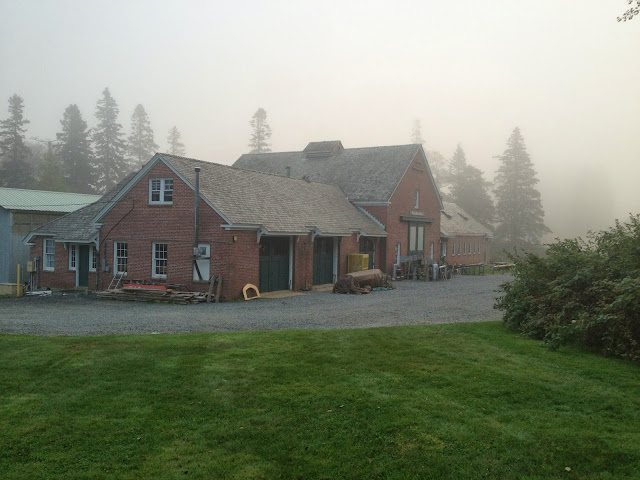 On Monday, I drilled holes in my planks at six inch intervals (nobody else working with Geoff had to do this because their planks had been pre-drilled), and then I tied the planks together with copper wire. 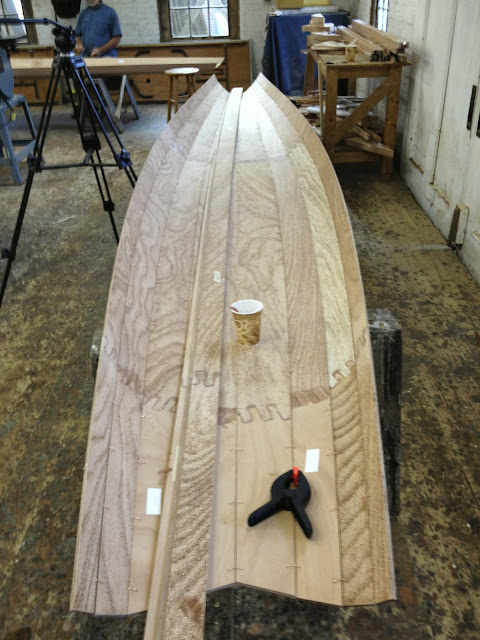 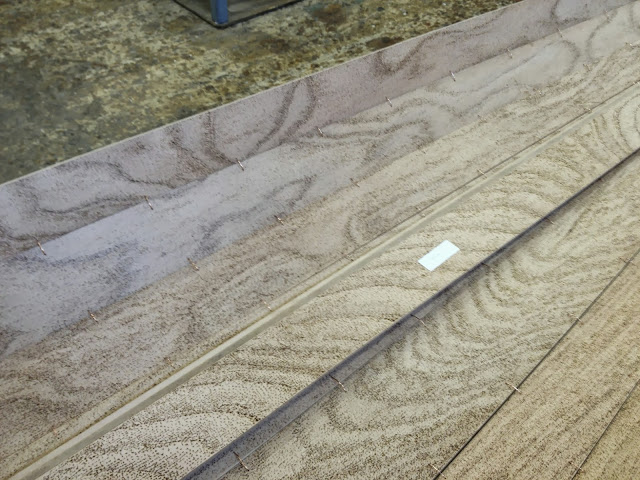 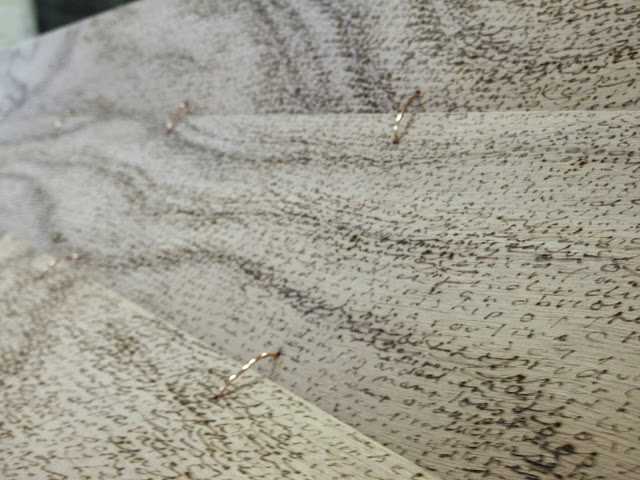 On Tuesday, I was really grateful to have ten other people in the shop. We all paired up and had a partner gather together the front of our boat, wiring the bow together. I drilled holes in the transom (the board across the back of the boat, and I was again grateful to have help holding the springy, unwieldy boards together while I wired it into place too. What's interesting is that all the wire is just there temporarily. It holds everything in place wile the boat is glued together with epoxy. The rest of the day was spent mixing small batches of epoxy and using a pastry bag to squeeze it in between the planks. 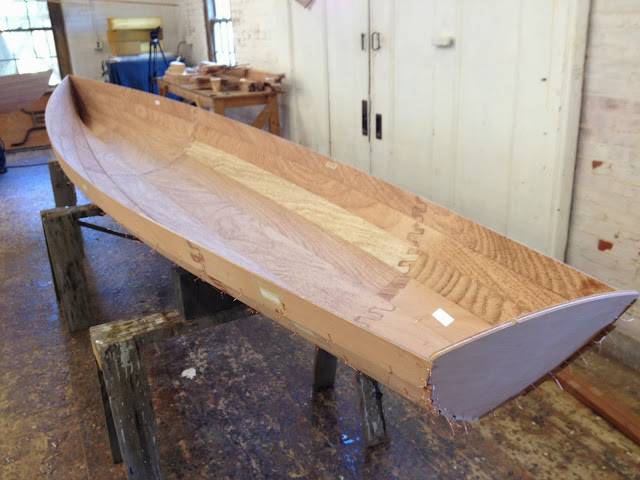 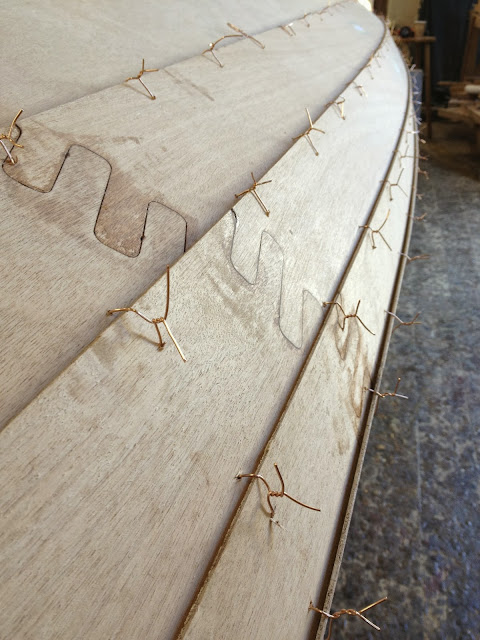 Wednesday, we removed all the wires and cleaned up some of the epoxy that dripped and squeezed out to places where it didn't belong. Then came the moment I'd been dreading: The fiberglass. Fiberglass comes in sheets that look like heavy white cloth. It is opaque. But once saturated with epoxy, it disappears. Imagine a microscopic glass fiber suspended in clear plastic. This is what my boat looked like by the end of the day wednesday: 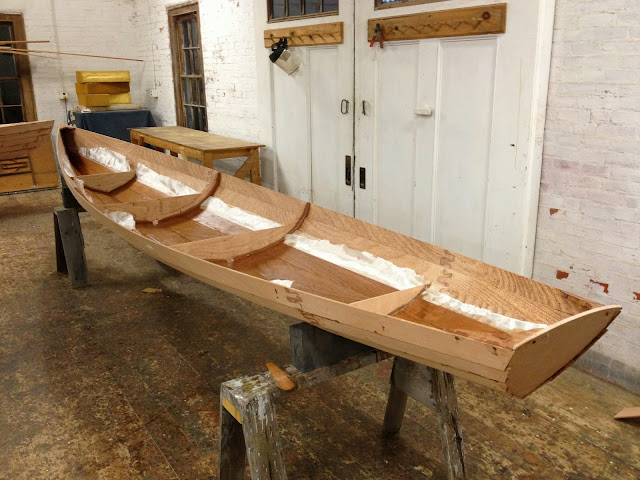 You can still see the white edges of the fiberglass cloth that needed to be trimmed. But the text was visually unhindered. I had been worrying about this moment since I had decided to use the design for the Annapolis Wherry in the Spring of 2012. I left the shop giddy with relief. Though I did sneak back in right before going to bed to check that it really did look okay.

On Thursday we trimmed the edges of the cloth, continued to epoxy, and glued the rails onto the boat -- another job for which I was grateful to have help. I suppose one could rig up some system of clips to get the rails on with just one other person helping, But, really, three people are necessary to avoid unreasonable stress. With so many people in the shop, we used five people to carefully glue, hold, and clamp the rails into place. And five people did not feel excessive for the job -- especially when the epoxy started to cure mid-install and we had to put twice as many clamps (and a few strategic c-clamps) on my boat. 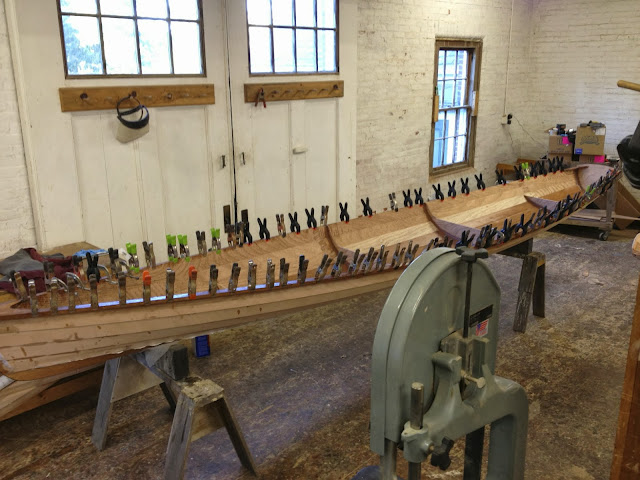 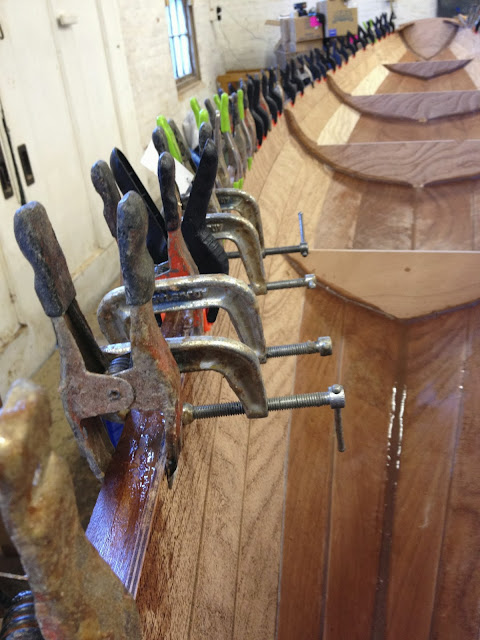 On Friday, we installed the decks over the air-chambers (which prevent the boat from sinking if it over-turns) and continued to epoxy. A lot of the work we did on Thursday and Friday would have been best spread out over four or five days so that epoxy could have cured between steps. And I was often dragging through gummy, partially-cured epoxy. The epoxy job is really rough as a result. But by the end of the day Friday, the boat was assembled. If I'd tried to build this boat without Geoff's expertise, I would have taken months. It will take me months to sand, re-sand, re-sand, and re-sand the ten coats of epoxy, paint, and varnish that I need for the finished boat. But I have a boat. And my months of labor putting text onto the wood worked just as I'd hoped. I am still experiencing aftershocks of relief and joy. 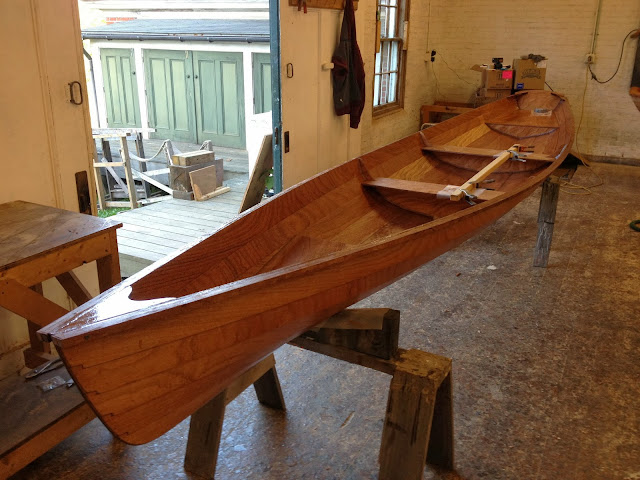 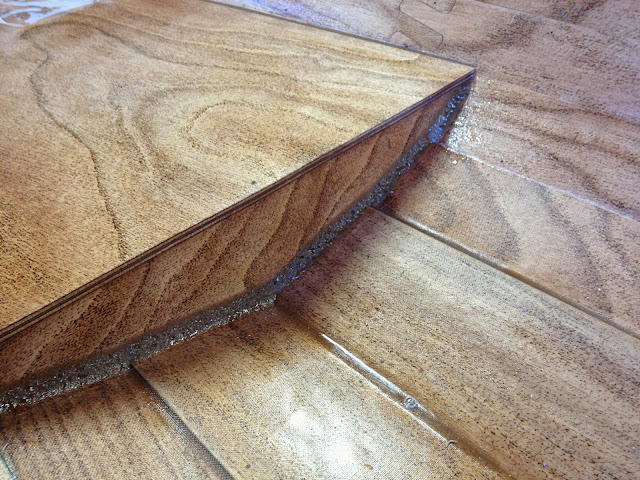