Saturday morning was gorgeous. Thirteen people showed up to row at 7:30. We had a slow start, which was unfortunate because we finished late, too. I then rushed over to The Buzzards Bay Coalition for a training/orientation session. I begin as a docent in the visitor center on May 7th.

The really unfortunate thing about getting off the water late was that I missed the "Hi, my name is Karen" introduction part of the meeting. Another rower was at the meeting and had explained to them why I was late. But I never got a chance to say who I am and to talk about my project and explain why I will always have a camera with me. By the time I arrived, we were broken into small groups and asked to present information from the training manual. At that time, I pulled out my camera and was going to briefly talk about my project to just my group.

Before I could do that, the woman sitting next to me got very worked up. "What's That." "What's It For?" "Does [the head of the education department] know your doing this?" Etc. Authority-whispering these things while the docent coordinator was still explaining our task. It got me really flustered and self-conscious -- and then defensive. I said that because I was late, I hadn't been able to do that. I turned the camera on. And before I could explain the camera, the same woman launched into our task. Then, when we were done, she started telling me that I was a bad person for filming. I turned the camera off.

After the presentations were over, I thanked the woman for pressing me about the camera. I tend to forget that some people are unsettled by cameras. So this was a good reminder that I need to be respectful, and, if I run out of time, I can not skip ahead and just do whatever I want without bringing people on board. I told her that I was just trying to do too much and that it was really rude of me to just turn the camera on. She said no, I was breaking the law. What really irritated me is that she never said that she had a problem with the camera. She kept referring to everyone else in the room and legality. She was as presumptuous as I had been by turning on the camera. Who made her spokesperson for everyone else? The fact that I had initiated our conversation with an apology evaporated from my mind, and I began to talk about the legality of taking pictures for private use. Then she began quoting school department policy, which is kind of a non sequitur -- so much so that I realized that it would be better to drop the subject. I thanked her again and restated that I had been incredibly rude. She reiterated that I was a bad person. Lovely.

The staff of the education department then started their portion of the session. One of the segments was about how the coalition uses social media to spread the word about the environmental work that they do. The docent coordinator said that, "I've already Tweeted about this training session and posted a picture of all of us here." She never asked our permission. 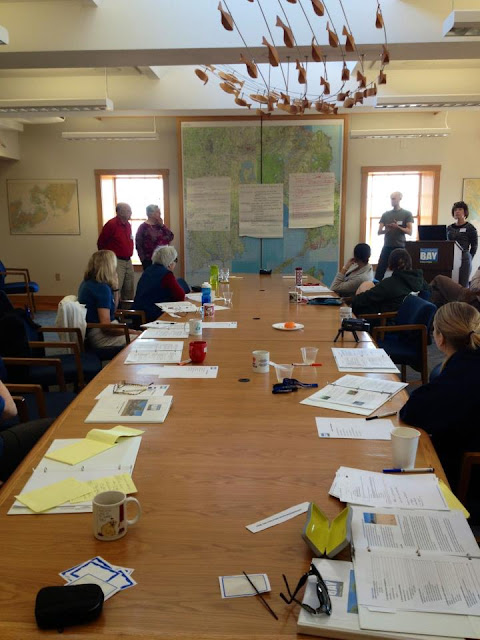