I bought a $20 pair of sneakers last week. And that is probably my shoe budget for 2013. My five-year-old boots will have to last until 2014. My frugality has a missionary zeal because I know that I can get this rowing project done by not spending money on anything but my art. Even so, this project will cost a lot. I've applied for several grants to help me cover the costs. But, so far, I have been turned down by all of them. One of the frustrating things about fundraising is that no one wants to be first. What if no one else funds a project, the budget isn't met, and the project doesn't happen? Then that first funder has wasted money. The second frustrating thing is that as much faith as I have in myself, this project is much bigger than anything I've done before, so I can understand why my proposal has been a difficult sell.

But I have come up with a solution to those two problems. I have broken this large rowing project down into several smaller projects. The scope of each component project is comparable to the scope of a previous project. And I decided to approach USA Projects, a non-profit that helps artists crowd-source funding. I figure that if I can get enough small funders to help me fund the current stage (a.k.a. a smaller project), then I'll have a much better chance of getting the attention of foundations and government agencies when I need funding for the next phase.

So right now I have narrowed my focus. Right now I am just building my boat. That's the project. I am trying to raise enough money to build an eighteen foot wherry, the surface of which I will inscribe with hundreds of pages of tiny, handwritten text. This beautiful, fast, light boat will be a sculptural memorial to my great-great-great-great grandfather, Gideon Dexter.

With the help of USA projects, I have come up with a budget. I need a minimum of $8,000. to get this boat made and to take it for a test run on the water. That will cover boat plans, wood, fiberglass, woodworking tools, woodburning tools, studio rent, the trailer that I'll need to transport the boat, the fees I need to pay for help from a professional boat builder (yes, this boat needs to float and be safe on the water), and updated video editing software. It's a super efficient budget. I'm hoping that I can raise a bit more to help pay for crew and to update my camera -- and to pay for renting a safety boat to use when I get this project out on the water. But $8,000. will get me there and will have the measurable result of a real boat being built.

USA Projects is a non-profit and they have vetted me and my project -- and they've concluded that it's doable and in keeping with their mission. They will require final reports and documentation from me that I have actually spent the money on the project as I said I would. This oversight also means that all donations through USA Projects are tax deductible.

Of course, funders of this project will get more than just a good feeling. I'm making several perqs  to give to people that donate funds, including a video and three new limited edition prints. Everyone who donates at least $25 will be invited to a reception at the first launch of the boat and will be able to download a new video work, along with a certificate of authenticity and exhibition privileges. Donors who give $75 will, in addition, receive a signed and numbered catalog from my recent show (only 25 are signed and numbered). The next three levels of support are invited to the reception, get the video download, and get a framed, signed print. Here's a preview of the prints: 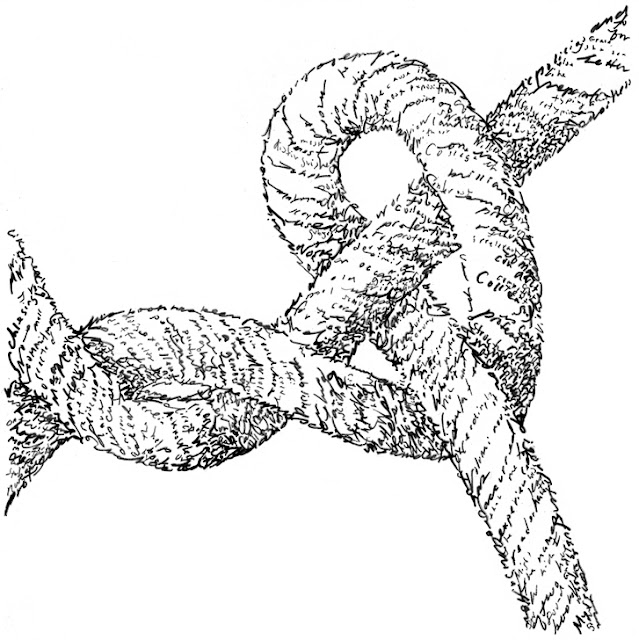 Donors who give $150. will receive the above signed, framed print of a fisherman's knot: Acknowledgments (The New Industrial State, part 2). 2013. pigment on paper, paper size: 5"x5" edition of 25. 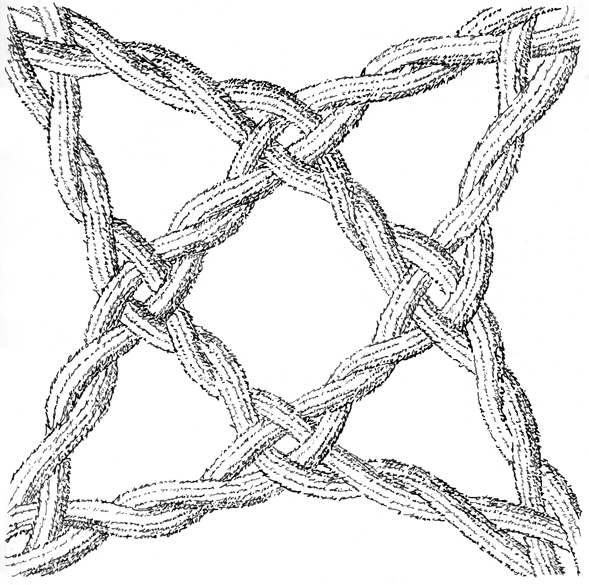 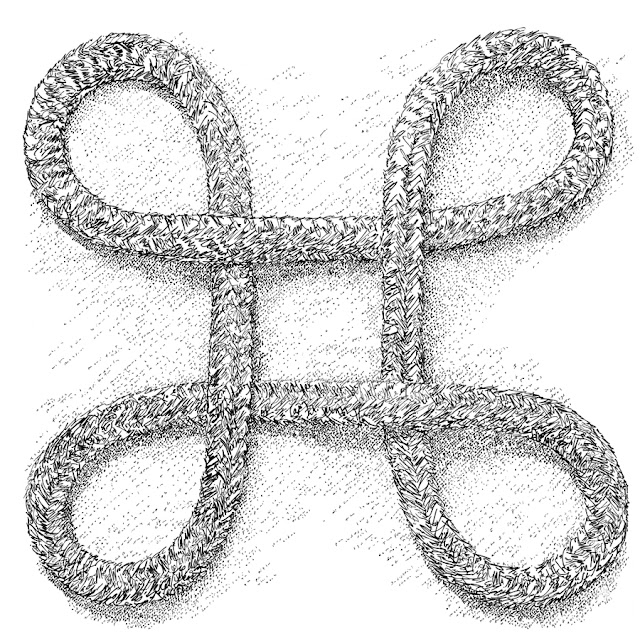 The text in all of these pieces is taken from John Kenneth Galbraith's The New Industrial State. Here are some details so you can see the words clearer: 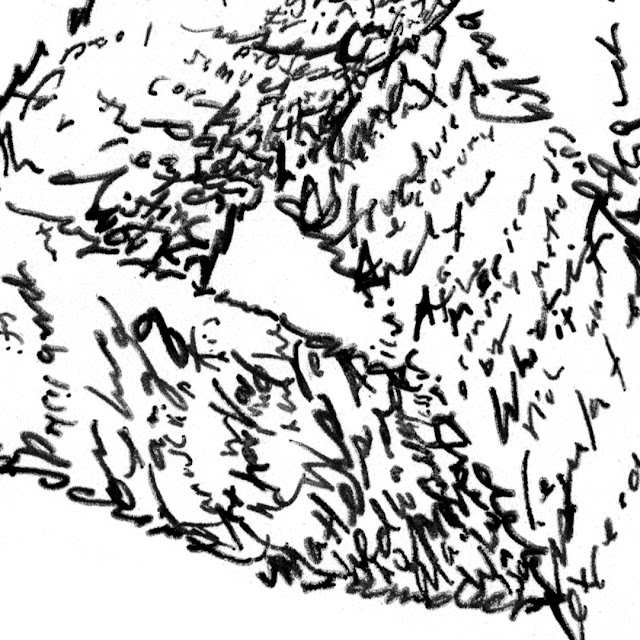 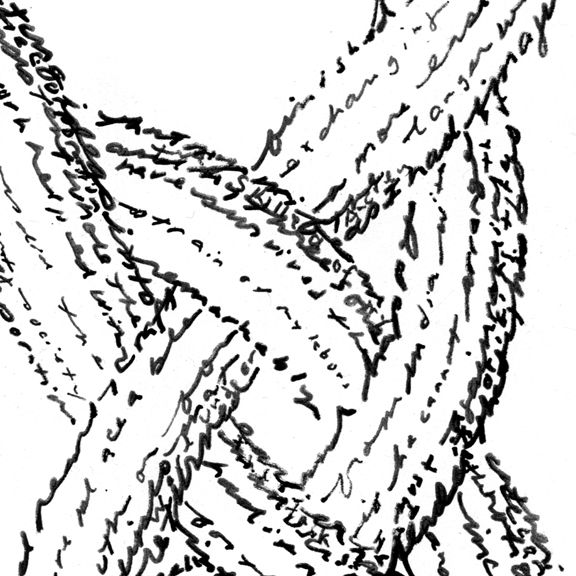 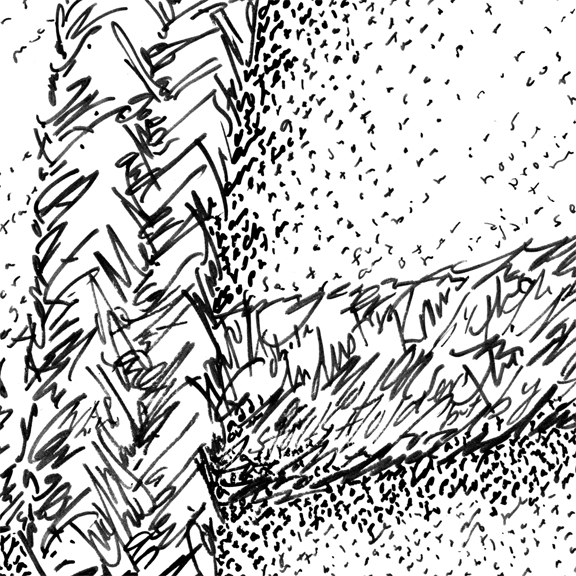 Donations of any amount are really appreciated. And, if you're in Southeastern Massachusetts and can volunteer to help me when I launch the boat, that will be appreciated as well!

Here's a link to the fundraising page on the USA Projects website:
http://www.usaprojects.org/project/the_conventional_wisdom